This past week was graduation week for my oldest son. It was full of awards dinners, senior showcase, parties and of course graduation. 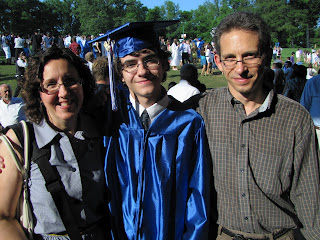 I am so thankful to the good friend who got him involved in theater. By performing on stage, managing and writing for theater he has acquired incredible confidence, and he has made friends that I believe he will keep for a very long time. 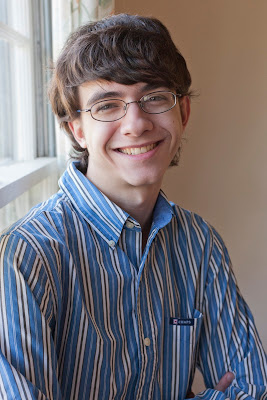 I had more fun than I thought was possible this past weekend. The hotel was conveniently located on 25th near 7th avenue with Truemart fabrics at the corner, and City Quilter a few doors down, which I visited with Connie and Kyle on Thurs afternoon.

I was waiting early Thurs afternoon at the entrance to Penn Station for Connie to arrive when Kyle came by on her way to the hotel. So together we chatted and waited for Connie. Once we were all together we walked to the hotel and checked in and proceeded to walk to Madison Square Park where we bought lunch and found a bench to enjoy the food. 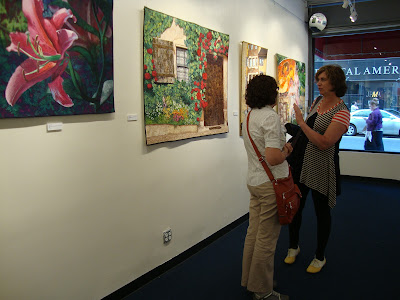 We walked back to the hotel but stopped first at City Quilter and enjoyed looking at the fabrics as well as an art quilt exhibit. Connie had to get ready for registration so Kyle, Cassy (who I had the pleasure to meet ) and me went to FIT. The museum there was closed but we wondered through several buildings looking at the students final projects. For dinner a bunch of us went to Whole Foods (I love that place!) where I had delicious Indian food which I ate with very good company at the hotel's patio. Later we all gathered again at the patio to share conversation and wine. 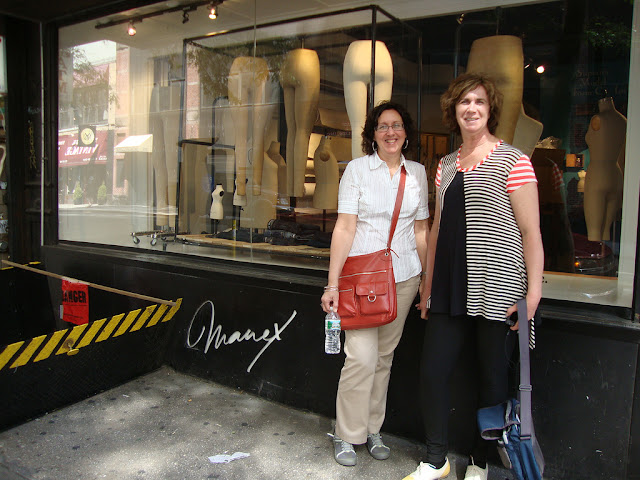 Friday was the craziest of days, Connie and I who shared a room woke up around 6:30 am since she had be at the lobby for registration. We had time to get breakfast at Whole Foods and waited for the rest of the group to arrive (among them Karen, my other roommate, and Andrea). Some of us had early Simplicity tours those who didn't, began with shopping. My tour was late in the day so I headed to Metro Textiles first. I don't know where we went next but I know I visited Mood, Pacific Trimmings, Spandex House and Elliott Berman before going to Simplicity for a tour. We did take a break for lunch at the perfectly named Stitch Bar &Lounge.

In the picture from right to left, Connie, Karen (also my roomie!), Ann from Sew Baby, mrsbewley and me.

After the Simplicity tour, Connie and I took a taxi to the Metropolitan Museum of Art where we were to meet with others from the group to see the Schiaparelli and Prada exhibit. At the exhibit I loved this Prada skirt

It will be a future project since Karen graciously offered to give me some of her leather scraps.

After the exhibit we went to dinner, I don't remember the name of the restaurant, since Elizabeth (great to meet you!) was guiding us I did not pay attention but the food was delicious and afterwards she took us to another place for gelato, yum!


At the hotel lobby we once again gathered this time to share our purchases and model those garments we made. I am wearing a maxi I made using Simplicity 2443. 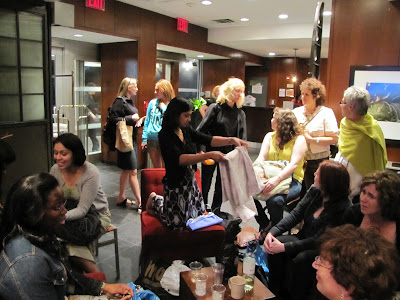 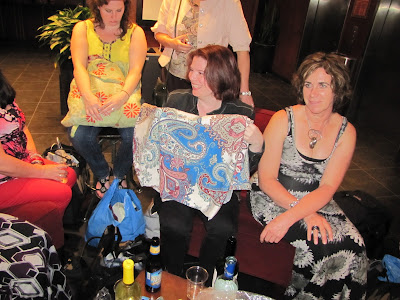 On Saturday we went to listen to the speakers at Pace University. We arrived a bit late since the taxi driver did not know where the school was and we wondered around for a bit trying to find it. As always Kenneth King was hilarious and I was introduced to another sewing author Diana Rupp from Make Workshop. 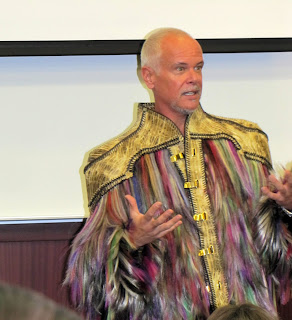 For lunch we visited Crisp

In the picture, top right is Emilie (Emilieatjalie on PR) from Jalie patterns. I had the chance to not only meet her but we chatted a number of times during the weekend. Jalie's new patterns include a raglan sleeve top which Emilie modeled with different design variations and fabrics; they were all beautiful and we were all excited about its release sometime soon.

Some of us decided to skip the last speaker, it was a beautiful day and we went to the Southstreet Market looking for a yarn shop that had moved, oh well. We took some pictures and headed back to the hotel to rest a bit before going to the group dinner.

Dinner at Tony's Di Napoli at Times Square was delicious. They were lots of raffles, I won a Jalie pattern! I sat next to Clio sporting her purple hair and wearing a stunning color blocked Burda dress. A big group decided to walk back from Times Square and we had such fun! Here we are posing in front of M&J Trimmings because who could resist?

For one more night we sat on the patio and laughed and wondered if other guests or hotel staff would come and complain... 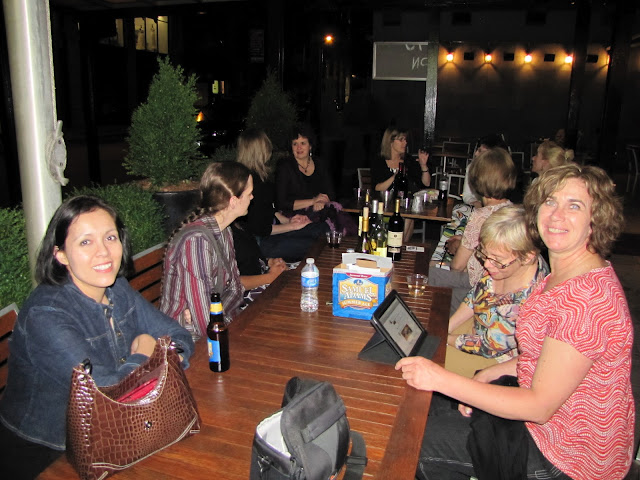 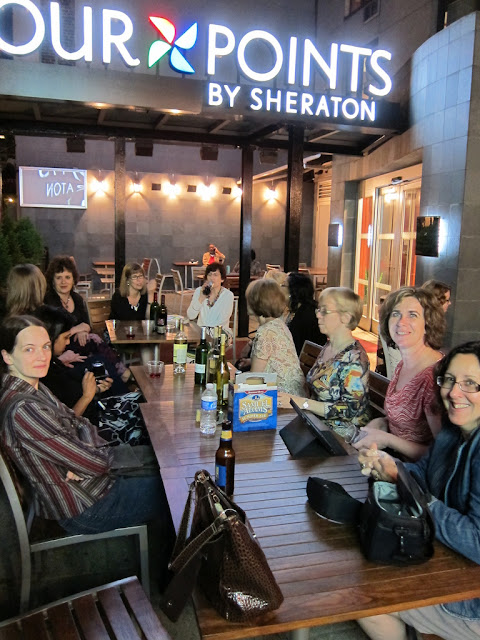 On Sunday morning after breakfast (at Whole Foods again!) Karen, mrsbewley and I walked to a flea market down the street where we found some shiny goodies. Karen and I said goodbye and after checking out I found myself on the patio again chatting, I had lunch, said goodbye to Jacqui and mrsbewly and took the train home.

Whew! Was I exhausted? oh yes, will I do it again? I sure hope so!

I will share patterns, fabrics and other goodies from the trip on the next post;this post took a few days to write and it is already long enough!
Posted by Lisette M at 8:38 AM 12 comments: 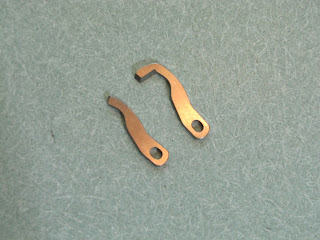 I have been working on a couple of things to take with me when I go to PR weekend in New York next Thursday (yay!) when the above happened to my serger. On the left is the upper knife and how it looked after I saw something flying out of my machine. It took me a while to figure out what had broken off. I think it was a pin that did it, one that I didn't see to pull out. I am very lucky to have a place with sewing machine parts so close to me; I was able to drop by yesterday with my broken knife and they matched it for me. The new one has been installed and I was able to continue on my maxi dress.

Reviews for the maxi and a couple of other things will be done after the trip. I hope to be able to wear these new things in NY, weather permitting, and have more exciting venues for the pictures than my living room.

I really liked the looks of these pants and I hoped that they would turn out to be a great basic. My experience sewing Burda pants has always been excellent, I cut a 40, I played with the ease at the waist a bit and I was done. Recently my waist has expanded (welcome to the 50s!) so I cut a 42 and when I tried them on they looked awful, wrinkles all the way down my back plus a baggy seat. To try to save them I took them in at the darts, center back and sides...they still look bad. So I took out my reliable Fast Fit by Sandra Betzina and shortened the back curve at the crotch. So it has all helped but those wrinkles at the legs are still there, even if they are less pronounced.
Next time I'm cutting the 40 and adjusting the waist, why didn't I just do that to start with?

The pants have a waist facing and side invisible zipper. 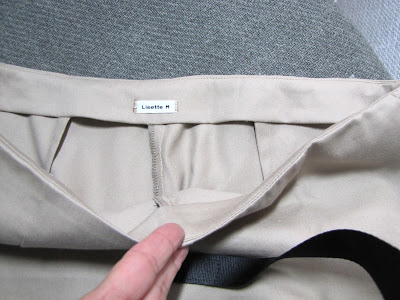 The waist at the front is lower than the front 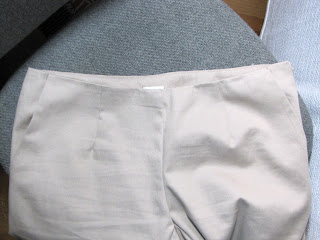 If you want to see fantastic jeans head over to Carolyn's blog, I'm so jealous! 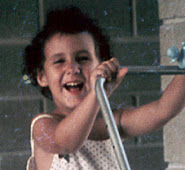 What I have read